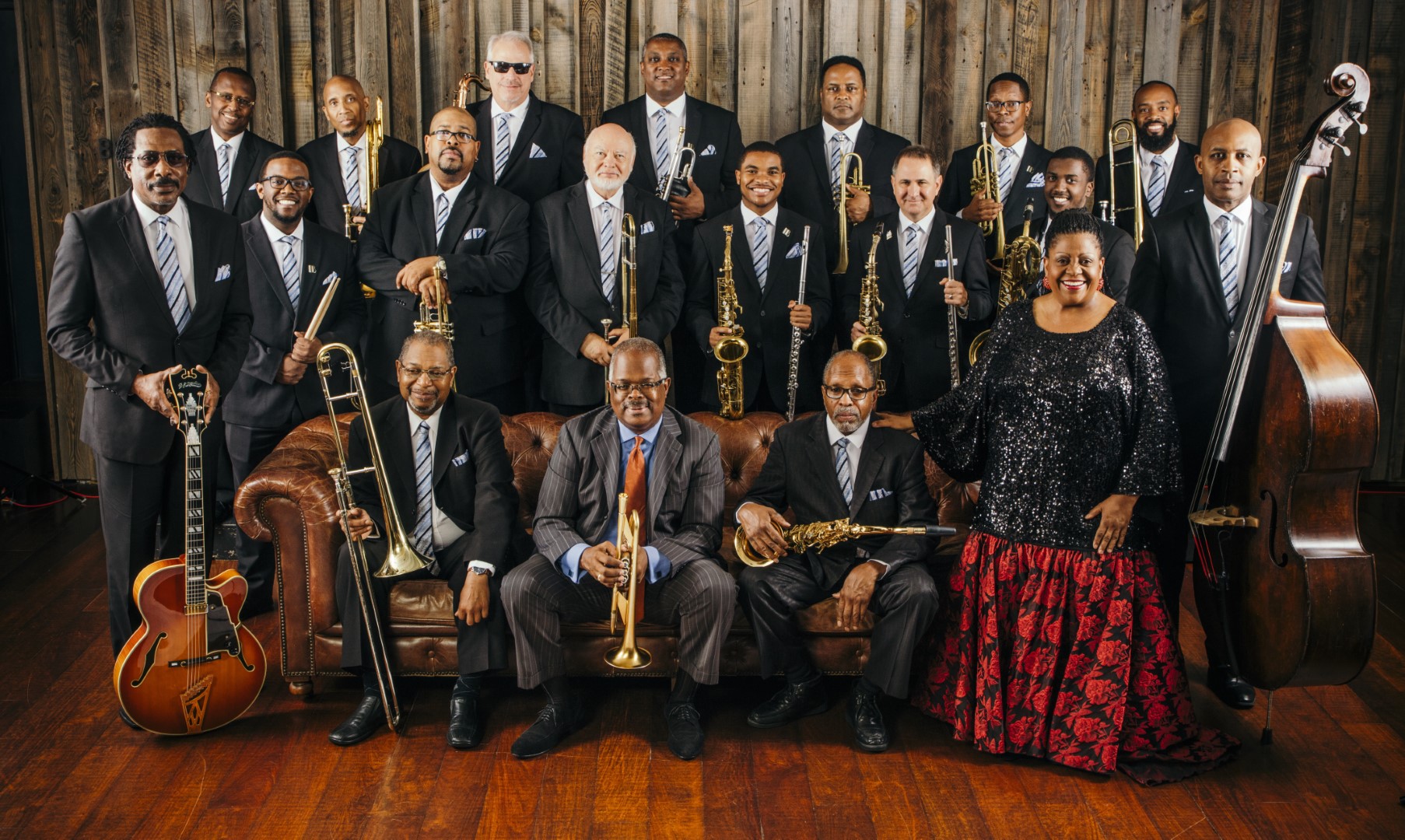 The Count Basie Orchestra is the only original and authentic, most prominent large jazz ensemble of the Big Band era, founded by the one and only Count Basie in 1935 recording regularly from 1936 on. Directed by veteran trumpeter Scotty Barnhart, the 18-piece Count Basie Orchestra features a peerless array of instrumentalists with combined credentials that have topped the upper echelons of the international jazz world for decades.

“…tradition served up with unassuming style.” – The New York Times

In the history of jazz music, there is only one bandleader that has the distinction of having his orchestra still performing sold out concerts all over the world, even 30 years after his passing and with members who’d been personally chosen by him. Pianist and bandleader William James ‘Count’ Basie was and still is an American institution that personifies the grandeur and excellence of jazz. The Count Basie Orchestra, today directed by Scotty Barnhart, has won every respected jazz poll in the world at least once, won 18 Grammy Awards, performed for Kings, Queens, and other world Royalty, appeared in several movies, television shows, at every major jazz festival and major concert hall in the world. The latest honors are the 2018 Downbeat Readers Poll Award as the Number 1 Jazz Orchestra in the world, and a Grammy Nomination for their 2018 acclaimed recording, All About That Basie, which features special guests Stevie Wonder, Jon Faddis, Take 6, and Kurt Elling among others. It follows their critically acclaimed release in 2015 of A Very Swingin’ Basie Christmas!, the very first holiday album in the 80-year history of the orchestra. Released on Concord Music, it went to Number 1 in the Jazz charts and sold out on Amazon. Special guests include vocalists Johnny Mathis, Ledisi, our own Carmen Bradford and pianist Ellis Marsalis. A BBC TV produced documentary on Mr Basie and the orchestra entitled Count Basie: Through His Own Eyes premiered on PBS in the US and UK in 2019 coinciding with the orchestra’s 85th Anniversary. It features interviews with Quincy Jones, Scotty Barnhart, Dee Askew, John Williams, and several other important members and associates of Mr Basie and the orchestra.

Some of the greatest soloists, composers, arrangers, and vocalists in jazz history such as Lester Young, Billie Holiday, Frank Foster, Thad Jones, Sonny Payne, Freddie Green, Snooky Young, Frank Wess, and Joe Williams, became international stars once they began working with the legendary Count Basie Orchestra. This great 18-member orchestra is still continuing the excellent history started by Basie of stomping and shouting the blues, as well as refining those musical particulars that allow for the deepest and most moving swing.

William ‘Count’ Basie was born in Red Bank, New Jersey in 1904. He began his early playing days by working as a silent movie pianist and organist and by eventually working with the Theater Owners Booking Agency (TOBA) circuit. It is also sometimes referred to as the ‘chitlin’ circuit’ that catered primarily to the African-American communities in the South, East, and Midwest. In 1927, Basie, then touring with Gonzelle White and the Big Jazz Jamboree, found himself stranded in Kansas City, Missouri. It was here that he would begin to explore his deep love of the Blues and meet his future band mates including bassist Walter Page.

In the 1920s and 30s, Kansas City was headquarters for the territory bands that played the mid and southwest. It was also ground zero for the heady mixture of blues, 4/4 swing rhythms and hot instrumentalists that were to become the standard bearers and precursors for the Swing Era and the underlying rhythm of Modern Jazz. Walter Page’s Blue Devils and Benny Moten’s Kansas City Orchestra caught Basie’s ear and soon he was playing with both and serving as second pianist and arranger for Mr Moten. In 1935, Bennie Moten died, and it was left to Basie to take some of the musicians from that orchestra and form his own, The Count Basie Orchestra, which is still alive and well today some 78 years later. His orchestra epitomized Kansas City Swing and along with the bands of Fletcher Henderson, Jimmy Lunceford, Duke Ellington and Benny Goodman, Basie’s orchestra would define the Big Band era.

While the media of the period crowned Benny Goodman the King of Swing, the real King of Swing was undoubtedly Count Basie. As the great Basie trumpeter Sweets Edison once said, “we used to tear all of the other bands up when it came to swing”. The basic fundamentals of Basie’s orchestra were and still are foot stomping 4/4 swing, an unparalleled use of dynamic contrasts, shouting the blues at any tempo, and just making people want to dance. The Basie orchestra evolved into one of the most venerable and viable enterprises in American music with the highest levels of continued productivity rivaling any musical organization in history.

The Count Basie Orchestra can be viewed between 1935 and 1955 as Old Testament and New Testament bands. The Old Testament band’s style was a combination of spontaneously developed riff-driven, or ‘head’ arrangements, full of the blues and relaxed, but intense swing that showcased a some of the greatest names in jazz history in Lester Young, Hershel Evans, Harry Edison, Buck Clayton, Dicky Wells, Jo Jones, Freddie Green and Jimmy Rushing among others.

The ‘New Testament’ Count Basie Orchestra was formed circa 1952 after Basie’s brief hiatus from the full orchestra as he was working with a small group of six to seven pieces during the industry-imposed recording ban that began in 1948. With the April In Paris recording in 1955, the orchestra began to set standards of musical achievement that have been emulated by every jazz orchestra since that time. The sound of the orchestra was constantly deepening and getting more precise as each series of non-stop tours were completed. One of the things that set Mr Basie’s orchestra apart from all others and is one of the secrets to it’s longevity, is the fact the Basie allowed and actually encouraged his musicians to compose and arrange specially for the orchestra and its distinctive soloists such as Snooky Young, Thad Jones, Frank Foster, and Frank Wess on flute, who recorded the very first jazz flute solo in history. Eddie Durham, Thad Jones, Ernie Wilkins, Quincy Jones, Neal Hefti, Sammy Nestico, and Frank Foster, to name a few of the more prominent Basie arrangers, have added volumes to the Basie Library. Through them, the Basie repertoire continued to broaden harmonically and rhythmically, making it more than hospitable to the talents of successive generations of musicians. The orchestra also began to become the first choice for the top jazz vocalists of the day including Frank Sinatra, Ella Fitzgerald, Tony Bennett, and of course, Basie’s ‘Number One Son’, the great Joe Williams.

As Basie allowed for a certain measure of change and for a variety of voices to emerge on the platform he created, his orchestra’s repertoire always remained accessible, endlessly interesting, and ultimately perfect for dancing. This can be even witnessed in the major motion picture of 1960, Cinderfella, starring Jerry Lewis. For the biggest scene in the movie, which required the perfect orchestra to dance to at the ball, Lewis chose none other than The Count Basie Orchestra. This movie was seen by millions and placed the orchestra at the top of everyone’s list for not only full concerts, but also Presidential Inaugural Balls, and for private parties of the world’s elite from New York to Bangkok, Thailand, to St Tropez in the South of France.

During the 1960s, throughout the 70s and into the 80s, the orchestra’s sound, swing feel, general articulation and style began to become more laid back and even more relaxed. As 30-year veteran trumpeter Sonny Cohn once stated, “This is a laid…back…orchestra….a…laid…back…orchestra”. With very few personnel changes, the orchestra members were able to blend into one sound and one way of phrasing that is now known as The Basie Way. Jazz orchestras all over the world began to emulate this way of playing. It’s unmistakable with its deceptive suspension of time and rhythm, but it’s one that is infectious and never loses that all-important dance element. In simple terms, the Count Basie Orchestra continued to set a precedent in 4/4 swing at any tempo that is still unsurpassed today. Swing is that intangible sound that makes you tap your foot.

Since Basie’s passing in 1984, Thad Jones, Frank Foster, Grover Mitchell, Bill Hughes, Dennis Mackrel, and now Scotty Barnhart, have led the Count Basie Orchestra and maintained it as one of the most elite performing organizations in Jazz. Its next recording, Live at Birdland, was recorded at the historic New York club in January 2020 and celebrates the first 85 years of the orchestra as well as the 60th Anniversary of the original Live at Birdland recording. It will be released on Candid Records in 2021 and was produced by Scotty Barnhart.